16.5m Power-cat
British America's Cup challenger, Team Origin needed a vessel powerful enough to tow their two America's Cup yachts.
It also needed enough volume to carry spare sails, booms, poles, and crew but on top of that they also required a stable platform where design boffins could record and analyse data. The logical solution was a power-cat.

The hull design came from Catamaran International while Salthouse Boatbuilders' in-house design team of Chris Salthouse and Nick Peal penned the layout and superstructure. Nick proved again he has a sharp eye for aesthically pleasing design while Chris' experience from 8 America's Cup campaigns was invaluable when designing the layout.
At 16.5-meters in length, Origin's new tender has a top speed of 30 knots and will tow comfortably at 20 knots. After commissioning in Auckland, the Origin tender was put through some rehearsals when she was required to tow round the world yachtsman Seb Josse into Auckland after retiring from the Vendee Globe. She also saw front-line action during the Louis Vuitton Pacific Series raced in America's Cup class yachts.

“Our new tender is an absolute glamour, it was exactly what we wanted, came out on time, on budget and of a higher quality than what we were expecting, and it’s very rare to be able to say all that these days. Congratulations Guys!!” 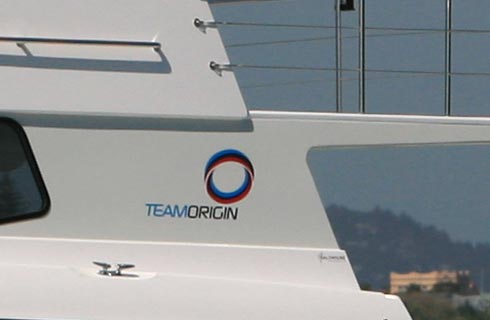